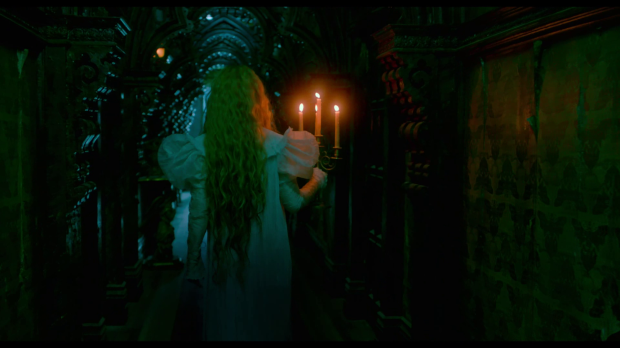 The Representation of the Gothic Heroine in Cinema

Since its literary beginnings, the Gothic has featured distinctive female characters who engage with, and are often central to, the uncanny narratives characteristic of the genre. The eponymous ‘Gothic heroine’ conjures up images of the imperilled young and inexperienced woman, cautiously exploring the old dark house or castle where she is physically confined by force – imprisoned by the tale’s tyrant – or metaphorically trapped by societal expectations of marriage and domesticity. The Gothic heroine is habitually motivated by an investigative spirit and usually explores her surroundings in a quest to uncover a sinister secret which shall, for example, reveal her love interest’s past or provide explanation for her supposedly supernatural encounters.

The importance of the Gothic’s women protagonists is not limited to these narrative functions but extends to considerations of the genre itself; the Gothic can be defined by its portrayal of the heroine. Ellen Moers’ work on female literary traditions is a key text in this respect, identifying the ‘Female Gothic’ as a distinctive mode within the genre. The ‘Female Gothic’ highlights the prevalence of female writers exploring the Gothic mode and the implied woman reader engaging with the heroine’s exploits. Moers writes that ‘Female Gothic’ texts – such as those by Ann Radcliffe – convey a specific form of ‘heroinism’ which evokes the idea of a ‘literary feminism’.

Moers’ work demonstrates how the Gothic and the Gothic heroine intersect with feminist criticism because, as Helen Hanson notes, ‘the female gothic bears a political charge’ (Hanson, 2007, 63). This ‘political charge’ is equally applicable to the Gothic film and its representation of the heroine. In cinema, the Gothic enjoyed particular attention with the 1940s cycle of melodrama and noir films which emphasised the Gothic traits of the old dark house, mystery and domestic threat, with the Gothic heroine’s exploits central throughout. Films such as Rebecca (1940), Gaslight (1940/1944) and Secret Beyond the Door (1947) are exemplary of this trend. Several writers have explored the political and feminist ramifications of these films which have been seen as Gothic or, as Mary Ann Doane writes, ‘paranoid woman’s films’ (Doane, 1987). The reception and interpretation of these films is inextricably linked to societal contexts in which these films were made, as Diane Waldman notes how the war and immediate post-war period offer distinct visions – and varying degrees of validation – of the heroine’s feminine perspective.

This conference shall engage with these questions of representation, interpretation and feminist enquiry in relation to the Gothic heroine throughout film history including present day incarnations, with films such as Crimson Peak (2015) directly re-engaging with the Gothic genre. This event seeks to wrestle with the difficulties posed by the Gothic as a mode which emphasises terror, the uncanny and suspense, alongside representations of women protagonists who given agency as investigators motivating narrative development but are subjected to horror for the story’s pleasure. These difficulties are not new to the Gothic genre. As Fred Botting notes: ‘Women’s gothic, it seems, straddles contradiction and challenge, persecution and pleasure’ (Botting, 2008, 153). Similarly, David Punter and Glennis Byron write that ‘[whether] female Gothic should be seen as radical or conservative has been an issue of particular concern’ (Punter and Bryon, 2004, 280). This conference shall illuminate the concerns, contradictions and challenges posed by the Gothic heroine on-screen through reference to specific case studies which re-engage with older examples of the Gothic and/or explore contemporary films, reflecting upon the renewed academic and commercial interest in the genre of recent years.

Topics can include but are not limited to:

–          Historical explorations of the Gothic heroine in cinema. How has representations of the heroine changed and how does this relate to larger social and political contextual concerns?

–          Contemporary incarnations of the Gothic heroine.

–          Comparisons between the cinematic Gothic heroine and the genre’s literary beginnings.

–          How does the Gothic heroine compare to other distinctive representations of female protagonists in genres such as melodrama and horror? Is the Gothic heroine a distinct and separate entity apart from other genres, or is she inextricably linked to them?

–          Can one speak of a separate Gothic heroine tradition in cinema?

–          The reception of Gothic film and Gothic heroine audiences.

–          The relationship between the heroine and space, particularly domestic spaces such as the house. How does architecture relate to the representation of the Gothic heroine?

–          The significance of costume and fashion to the Gothic heroine’s identity.

–          Comparisons between the Gothic heroine and other protagonists, such as the archetypal ‘other woman’ or male lead. How, for example, is the concept of ‘Gothic feminism’ affected by the genre’s representation of masculinity/masculinities?

Please submit proposals of 500 words, along with a short biographical note (250 words) to gothicfeminism2016@gmail.com by 18th March 2016.

Hanson, Helen. (2007). Hollywood Heroines: Women in Film Noir and the Female Gothic Film. London and New York: I. B. Tauris.