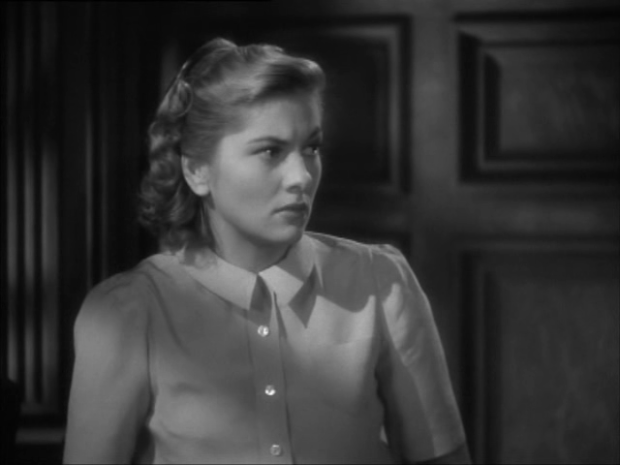 The third film to be shown at Gothic Feminism will be Rites of Passage by Catherine Grant, University of Sussex.

Rites of Passage is a video essay on the liminal moments of the protagonist of Rebecca (Alfred Hitchcock, 1940), played by Joan Fontaine. This is a low resolution, educational, remix compilation, featuring sampled music originally composed for the film by Franz Waxman. This work was completed in memory of Joan Fontaine (22 October 1917 − 15 December 2013). Further information on the video is discussed in: ‘The Remix That Knew Too Much? On Rebecca, Retrospectatorship and the Making Of Rites of Passage’ in: The Cine Files, 7, Fall 2014. Online at: thecine-files.com/grant/). Extract from ‘The Remix That Knew Too Much?’:

‘Looking back on it a year later, Rites of Passage clearly marked a shift in my experiments with videographic film studies, most notably heralding my growing confidence in the use of explicitly creative (and not always primarily informational, or scholarly) approaches to research and videography. It is clear to me now, also, that in the context of this work feminist and psychoanalytic theories not only offer an additional intertextual axis along which to “read” my video, as well as its process of making, but they actively contributed to it by forging similar kinds of personally and historically contingent phenomenological frames as the film(s) that inspired this work: Hitchcock and Fontaine’s Rebecca (and Robert Wise’s The Haunting). Like films, we don’t just come to know theoretical readings, or any other discursive frames for our viewings, we also have conscious and unconscious experiential, affective and also retroactive relationships with them, which become inseparable from our acts of spectatorship and retrospectatorship. As key parts of this, the activation of curiosity or the exercising of epistemophilia are also sensuous (not simply cognitive) activities; there is certainly many a queer pleasure to be had in the cinematic or cultural experience of not quite knowing for sure. Perhaps exploring these pleasures, and their attached poignancies, using the kinds of videographic parameters and techniques I have been describing, can enable us to get in touch with important aspects of film spectatorship that seem to be less accessible or even inexpressible in other (differently constrained) forms of scholarly work.’

Catherine Grant is Senior Lecturer in Film Studies at the University of Sussex. Author and editor of numerous film studies videos, as well as of written studies of intertextuality, film authorship and adaptation theories, she runs the Film Studies For Free, Filmanalytical and Audiovisualcy websites and, in 2012, guest edited the inaugural issue of online cinema journal Frames on digital forms of film studies. She is a founding co-editor of [in]TRANSITION, a new videographic film and moving image studies journal. Rites of Passage can be viewed online here: https://vimeo.com/82092389 Contact: C.Grant@sussex.ac.uk 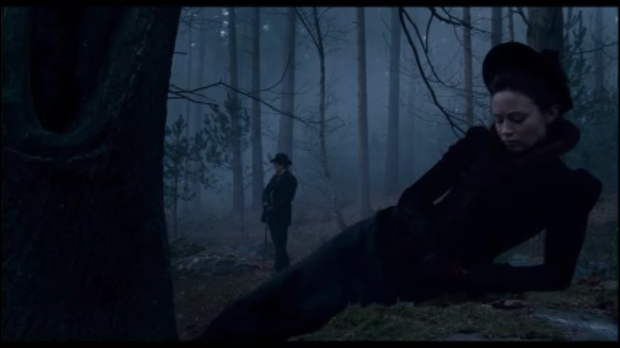 The second film to be shown at Gothic Feminism shall be It’s written by the dress. Gothic sleeves, Gothic worlds by Katerina Flint-Nicol from the University of Kent. Here is Katerina’s abstract for the piece:

the spell of longing,

and not to think.’ Silence, PJ Harvey

‘Those solo show dresses were fitted and intricate and armour-like’ Maria Mochnacz.

I first saw PJ Harvey at The White Swan in Hampstead. Playing one of her first sets in London before the release of Dry, I was an immediate fan. Struck by the sheer force, potency and maturity of her music, the small crowd, I especially, were mesmerised by Harvey’s slight frame. How her body did not buckle under the weight of her cherry red Gibson guitar was seemingly an act of enchantment. My admiration (or obsession) for Harvey has grown with every album release and visual transformation since that first encounter. However, there has been one moment of wavering. Listening to Harvey’s 2007 release, White Chalk, I was taken aback with the bleakness and the extent of departure from her previous work. Listening to it just the once, I put it away.

Since that time, there have been many ‘returns to Victoriana’ appearing on TV and on film; Ripper Street (2012 – ), Penny Dreadful (2014 – ), The Woman in Black (2012), and Crimson Peak (2015), to name a few. Watching, I began to notice the sleeves in the female costume, images that kept on reminding me of Harvey’s dress in the photos for White Chalk and her live shows. Returning to this album, it was hard not to observe the prominence of sleeves at the shoulder were to Harvey’s dress, a design that found correlation in films and TV series I had watched. Since Rid of Me (1993), PJ Harvey has always drawn upon differing female identities to visualise her music. Predominately, these have been camp reconfigurations such as her ‘Joan Crawford on acid’ look for, To Bring You My Love (1995). For White Chalk, Harvey dresses as a Victorian governess, a costume with heightened sleeves. It is sleeves that are the focus of this video essay.

In collating the clips, I have not only searched for the obvious examples (no one can ignore sleeves in Crimson Peak), but also variations. This approach allowed for the inclusion of works that fall outside of a Victorian setting, whilst inviting consideration into the historical evolution of sleeves and their developed employment in costume on TV and film.

In constructing this piece, I considered many approaches but finally decided on shaping it by harmonising image with the music. Listening to White Chalk, you can’t help but be struck with how Harvey animates a sense of Gothic. She sings of longing, death, murder and solitude. The world of White Chalk evokes Wuthering Heights (1847), Northanger Abbey (1817), and Jane Eyre (1847). Talking of her work, Harvey has consistently described the writing process as the desire to create cinematic universes in her songs. Keeping this as a line to follow, many of the images carry a certain resonance with the songs, either by emotion or through the lyrics.

As a final word, this is very much a work at its inception! In pulling Harvey’s music together with costume, I am considering the cultural currency of this costume not only as a resource to approach the construction of female subjectivity, but also how costume functions in creating gothic worlds.

Passages of Gothic is the first film which will screened at Gothic Feminism under the Videographic Works section. The film was originally projected as a multi-screen installation for the University of Kent’s International Festival of Projections on Sunday 20th March 2016 in Eliot College. Extract from the film’s programme notes:

Alfred Hitchcock’s Rebecca (1940) is often cited as the first in a cycle of films emerging in Hollywood in the 1940s labelled as ‘Gothic’. These films – which have also been called ‘melodramas’, ‘women’s films’ and ‘female film noirs’ – feature similar narratives focusing on the central female protagonist: the Gothic heroine. In all these films, the Gothic heroine encounters the old dark house which harbours a sinister secret which the heroine must investigate, often in fear for her life. This threat usually emanates from a male love interest, or is sometimes presented as the oppression of a larger patriarchal society. These films – which also include Gaslight (1944), Secret Beyond the Door (1947) and Sleep, My Love (1948) – feature remarkably consistent motifs, including keys, staircases, images of the heroine alone in the dark and the threat of the domestic space. Significantly, the study of film history reveals that these tropes are not isolated to the Hollywood Gothics of the 1940s but, in fact, continue to inform and appear within the Gothic cinema of today. This installation shall highlight and explore these similarities.

This project focuses on the female performance in these films in order to show the narrative and visual agency given to characters who are often seen as passive subjects and victims. Whilst the Gothic heroine may indeed be threatened by her male counterpart or dangerous environment, these stories encourage us to identify with the female lead, admiring her bravery. We engage with these films’ narratives by aligning with the Gothic heroine and her experiences. In particular, our exploration of space is mediated by the Gothic heroine’s actions. This project will illuminate how such investigation consistently takes place within the domestic space: the safety of a home is transformed into the mysterious and dangerous space of the old dark house. Comparing these films demonstrates how the Gothic heroine is often framed within the in-between places of a house: the stairwell, the hallway or the doorway. These thresholds are spaces which blur the boundaries between the public and private spheres of a home, in much the same way these Gothic narratives present a slippage between the real and the imagined; the everyday and the supernatural.

It is for these reasons that Passages of Gothic is presented within Eliot Dining Hall. Eliot College is a building which is also both a public and private space, containing professional forums for study (lecture halls, seminar rooms and offices) and private rooms (student bedrooms and kitchens). The Hall is at the heart of the college and provides passageways between these distinct locations. The Hall’s distinctive appearance has also historically made it the site for public and private events, and its scale is evocative of the intimating houses the Gothic heroine explores in these films. As the name of this event suggests, Passages of Gothic therefore invites you to immerse yourself into the Gothic heroine’s world.

The film is divided into six ‘chapters’. Together, these chapters create a narrative which is reflective of the fictional journey taken by the Gothic heroine: the heroine enters the house; she is forced the investigate strange occurrences; she is threatened by someone or something; and she may or may not survive her ordeal. In Passages of Gothic these six chapters are:

Passages of Gothic is the culmination of the research conducted by the Melodrama Research Group at the University of Kent into female performance, stardom, genre conventions, Gothic tropes and the representations of the heroine on-screen. This installation showcases the re-emergence of Gothic tropes – in a remarkably consistent fashion – across film history, highlighting the importance of the Gothic heroine within this. Our celebration of the Gothic’s strong, brave, and active heroines contributes to an important, broader research question: why, after 75 years, do these representations of the Gothic heroine persist in the 21st Century?

Image by: Lies Lanckman and Ann-Marie Fleming (image from The Innocents (1961)

We are excited to announce there shall be four video essays/short films screened as part of our videographic section at the conference. These works all explore representations of cinema’s Gothic heroines in a variety of ways and contexts. These works are:

Thanks to all for registering!

Here are some tips to help you plan your visit to Gothic Feminism at Kent:

– Keynes College is located very close to the main bus stop on campus. When getting off the bus, turn right and follow the path towards the main campus. Take the first turning on your left and you will see the front of the college, with glass doors. Registration will be taking place in the foyer area just inside.

– Further details on travelling to Kent can be found here: https://gothicfeminism.wordpress.com/travelling-to-kent/

– Registration shall take place at 9am on Thursday. The conference shall begin at 9.30am.

– Finally, we are very excited to have two stalls at the conference. One shall feature books from Auteur Publishing, including titles from their Devil’s Advocates series (http://auteur.co.uk/?p=354). The other shall be Hic Dragones, a press run by one of our speakers, Hannah Priest (http://www.hic-dragones.co.uk/). So do remember to bring some spending money with you!

There is one week left to register for the conference and registration will close on Wednesday 18th May 2016.

To register, please go to: http://store.kent.ac.uk/browse/extra_info.asp?compid=1&modid=1&deptid=26&catid=158&prodvarid=207&searchresults=1

Alternatively, you can visit the Kent Online Store and search for ‘Gothic Feminism’: http://store.kent.ac.uk/

The conference fee includes lunch and tea and coffee breaks on both days.

Further information on travelling to Kent, and some useful links, can be found here: https://gothicfeminism.wordpress.com/travelling-to-kent/

We look forward to welcoming you to Kent!