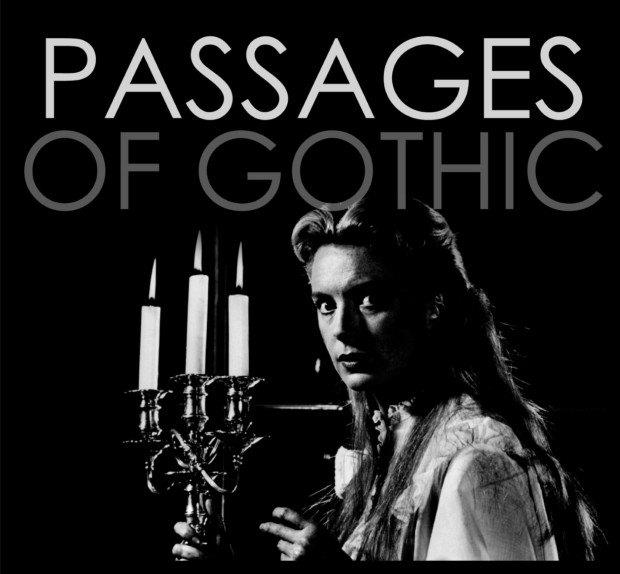 Passages of Gothic is the first film which will screened at Gothic Feminism under the Videographic Works section. The film was originally projected as a multi-screen installation for the University of Kent’s International Festival of Projections on Sunday 20th March 2016 in Eliot College. Extract from the film’s programme notes:

Alfred Hitchcock’s Rebecca (1940) is often cited as the first in a cycle of films emerging in Hollywood in the 1940s labelled as ‘Gothic’. These films – which have also been called ‘melodramas’, ‘women’s films’ and ‘female film noirs’ – feature similar narratives focusing on the central female protagonist: the Gothic heroine. In all these films, the Gothic heroine encounters the old dark house which harbours a sinister secret which the heroine must investigate, often in fear for her life. This threat usually emanates from a male love interest, or is sometimes presented as the oppression of a larger patriarchal society. These films – which also include Gaslight (1944), Secret Beyond the Door (1947) and Sleep, My Love (1948) – feature remarkably consistent motifs, including keys, staircases, images of the heroine alone in the dark and the threat of the domestic space. Significantly, the study of film history reveals that these tropes are not isolated to the Hollywood Gothics of the 1940s but, in fact, continue to inform and appear within the Gothic cinema of today. This installation shall highlight and explore these similarities.

This project focuses on the female performance in these films in order to show the narrative and visual agency given to characters who are often seen as passive subjects and victims. Whilst the Gothic heroine may indeed be threatened by her male counterpart or dangerous environment, these stories encourage us to identify with the female lead, admiring her bravery. We engage with these films’ narratives by aligning with the Gothic heroine and her experiences. In particular, our exploration of space is mediated by the Gothic heroine’s actions. This project will illuminate how such investigation consistently takes place within the domestic space: the safety of a home is transformed into the mysterious and dangerous space of the old dark house. Comparing these films demonstrates how the Gothic heroine is often framed within the in-between places of a house: the stairwell, the hallway or the doorway. These thresholds are spaces which blur the boundaries between the public and private spheres of a home, in much the same way these Gothic narratives present a slippage between the real and the imagined; the everyday and the supernatural.

It is for these reasons that Passages of Gothic is presented within Eliot Dining Hall. Eliot College is a building which is also both a public and private space, containing professional forums for study (lecture halls, seminar rooms and offices) and private rooms (student bedrooms and kitchens). The Hall is at the heart of the college and provides passageways between these distinct locations. The Hall’s distinctive appearance has also historically made it the site for public and private events, and its scale is evocative of the intimating houses the Gothic heroine explores in these films. As the name of this event suggests, Passages of Gothic therefore invites you to immerse yourself into the Gothic heroine’s world.

The film is divided into six ‘chapters’. Together, these chapters create a narrative which is reflective of the fictional journey taken by the Gothic heroine: the heroine enters the house; she is forced the investigate strange occurrences; she is threatened by someone or something; and she may or may not survive her ordeal. In Passages of Gothic these six chapters are:

Passages of Gothic is the culmination of the research conducted by the Melodrama Research Group at the University of Kent into female performance, stardom, genre conventions, Gothic tropes and the representations of the heroine on-screen. This installation showcases the re-emergence of Gothic tropes – in a remarkably consistent fashion – across film history, highlighting the importance of the Gothic heroine within this. Our celebration of the Gothic’s strong, brave, and active heroines contributes to an important, broader research question: why, after 75 years, do these representations of the Gothic heroine persist in the 21st Century?

Image by: Lies Lanckman and Ann-Marie Fleming (image from The Innocents (1961)