My sincerest thanks to everybody who came to participate in and support our second Gothic Feminism conference on the representation of women in Gothic and horror cinema.

A special thank you to our keynote speaker Dr Xavier Aldana Reyes for his excellent keynote which perfectly captured the mood and themes of this conference by talking about “What Final Girls Did Next: Horror Heroines in the Age of Postfeminism”. Xavi’s talk opened events and, in a particularly apt fashion, placed an emphasis upon feminism and the discourses of post-feminism. Gothic Feminism is, of course, the name of our research group which generated this conference and the name is no accident: the aim of the group is to unapologetically focus on women and their representation on the cinema screen. Our activities are relatively modest but we do sincerely hope to contribute to that under-researched area of the Gothic in film which Xavi identified in his talk.

The name Gothic Feminism also poignantly incorporates two particular points Xavi emphasised in his talk. First Xavi asserted how the Gothic and horror provide “empowering tools through which to study gender representation”, as well as related issues such as the study of women filmmakers and reception studies (but with a view to avoid essentialist conclusions). Second, there is a sense that cinema (and particularly contemporary cinema) actively engages with these discussions and provides a forum through which we can explore the complexities of feminism and post-feminism (or, as Xavi’s talk discussed, post-feminisms) in the 21st Century.

In my opening remarks and response to Xavi’s talk, I mentioned how many of the above issues are also embodied by the slippage in definitions and boundaries between Gothic and horror. As the call for papers for this event highlighted, Gothic and horror each have their own distinctive traditions for female representations yet these are very much comparable in respect to the mode or genre’s relationship to feminism: in both Gothic and horror, we have films which have central, female protagonists who have narrative and visual agency, and yet whose activities are contained within stories of violence, threat and oppression. The difficult question Gothic and horror equally pose is: are these texts exploitative in their representations, or are they using such plots in order to challenge, undermine and ultimately challenge the inequality of women experienced in real life?

And it is testament to this similarity between Gothic and horror in respect to women that the key examples Xavi identified in his talk could be classified as either or both. These include: Crimson Peak, The Witch and Under the Shadow. These examples are horror films – and one could argue for the presence of the archetypal Final Girl in each of these narratives – and yet Xavi also notes how these women are Gothic heroines. So we must ask ourselves: what relationship does Gothic have to horror – or horror to the Gothic – in respect to female representation? What can we say about the centrality given to female performance in both these genres/modes? How does this relate to feminism?

How does one define this feminism or post-feminism? Should we, following on from Xavi’s talk, be discussing the concept in a way which emphasises multi-faceted approaches? Therefore should we speak of Gothic or horror feminisms? And, in light of this, are the women in these films ultimately women-in-peril of the Gothic heroine kind, or are they Final Girls, or are they both?

The Gothic and horror genre is (to borrow Xavi’s terminology once again) a “language” through which to discuss these issues. This conference enabled us to begin a fruitful debate which extends this language, establishing an inclusive but diverse vocabulary in order to explore the connections between feminism, female representation, the Gothic and horror.

In doing so, the conference far exceeded our expectations in that we saw papers which covered a broad range of films, topics and female protagonists, highlighting discourses between texts under the heading of Gothic and horror. This conversation opened with Crimson Peak as the film nicely exemplifies the blurring between these two within contemporary film, but this was only a fragment of the wider discussion. We have taken a journey through cinematic history where the heroines may be old or young, the victim or the aggressor, human or supernatural or mechanical, and maybe not even gendered at all; or, at least, gender is highlighted to be another construction, a concept of porous definitions.

This debate on Gothic and horror has highlighted mainstream films, particularly those made in the US, but it also crossed national boundaries, as well as genres and even mediums: this discussion is just as relevant to television and videogames.

There were several recurring themes: the works of Doane, Clover, Kristeva and Creed were cited often, and Freudian analysis – particularly the evocation of the uncanny – haunted many of the papers given. There was an on-going debate on the question of genre: what makes a Gothic or horror film, and what term should be used to incorporate such definitions? Over the course of the conference, various names were utilised and discussed, including: Gothic, horror, Female Gothic, Gothic Romance, Gothic fairy tale, eco-Gothic, melodrama, film noir (or neo-retro noir), Gothic horror, comedy, folk horror, slasher film, possession films, vampires, survival horror.

The diversity of genre labelling possible also speaks to another central theme of the conference: the tensions that exist between borders and the subversion of these perceived boundaries. The variety of genres listed above are a good example of this, which many papers explored by discussing how conventional genre tropes could be undermined or transformed in the representation of the central female protagonist. Importantly, many papers highlighted how this process exists as a dialectic relationship with its knowing audience: contemporary films, in particular, draw upon and then subvert the viewer’s previous conceptions of the conventional Gothic heroine or Final Girl. This raised another important issue implicit in several presentations: one must consider how the women on screen relate to spectators in real life as this, of course, has significant ramifications in how such texts relate to feminist discourses.

During the conference there was a panel called “transgressive women” and, indeed, the term perhaps best describes the protagonists seen in these films and shows. These women defy easy definitions or categorisation and, together, these heroines present a complex and complicated picture of how women in Gothic and horror are represented. And that, perhaps, is the most important point: these characters necessitate the need for interpretation and evaluation as we assess how these stories of fear and terror exploit, celebrate or appropriate these tales in their depiction of the female experience.

And I am reminded once again of Xavi’s phrase from his keynote: Gothic and horror are “empowering tools through which to study gender representation.”

So we end where we started, at the beginning of this event with Xavi’s talk on feminism and this, I think, is particularly apt: as the conference has helped to show it is within feminism, post-feminism or feminisms which is where all conversations of this topic should begin, and not end.

Thank you all so much again for your contributions to the event. 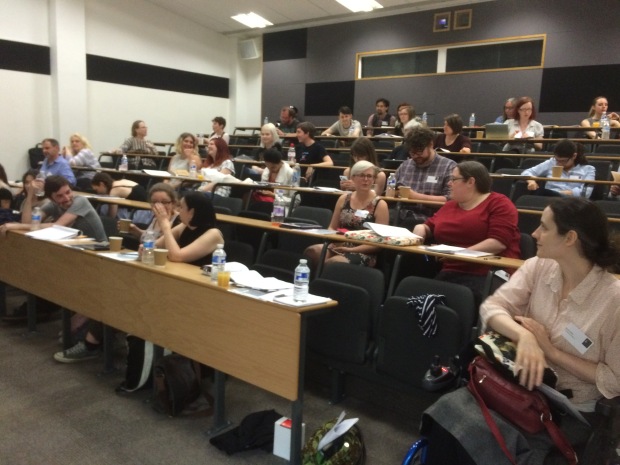